James Loving is a Former Professional American Football Player who played receiver for the Philadelphia Eagles. After graduating from Alan B. Shepard High School in 1984, Loving had a steller collegiate career playing 2 years at Santa Rosa Jr. College (84-86) in California then at the University of Wyoming (86-88). He was drafted in 1988 to the Canadian League (the British Columbian team) before being asked to sign with the Eagles that same year. He played 2 years with the Eagles before ending his NFL playing career due to a major knee injury.


In 1994 he and a few of his fellow former NFL buddies put on a football camp in Wyoming called “The Double Day Football Camp”. It was a huge success.


He has dedicated his life to empowering the Inner City Youths by motivating them and giving them hope for a better future and assuring them that there are so many avenues that they can use to achieve their life goals. He does this by working hard to develop and implement programs such as football camps and other educational and social events designed to teach the fundamentals and build self confidence. Besides his camps and other Philanthropy work, he also gives back by volunteering and donating time to “The Right Star Outreach Center” owned and managed by his mother in Robbins, Illinois.


He appeared on the Ray Ellis sports show to discuss the NFL draft and other sports topics. The interview went so well that he was asked to host his own sports radio talk show. “Loving that Sport Talk” which is now a huge success on VoiceAmerica.


Over the past months he has thrown several successful charity events and is now working on his newest projects. His motivational speaking has made huge positive impacts on his audiences. Join James in his quest to make a positive difference for our youth by making a donation to his organization.

I have been busy and neglecting my fan page and I apologize for the lack of updates. Thanks for being patient and sticking with me.

Well, here I am.  I have been in Chicago helping with charity events. 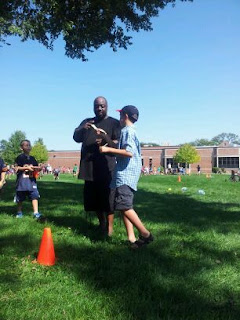 I'm gearing up for the next season of football camps and motivational speeches.  If you are ready to book an event, contact me at jamesloving01@yahoo.com.

Inspirational words today come from the great Abraham Lincoln...“I do the very best I know how, the very best I can, and I mean to keep on doing so until the end.”  Keep those words in mind and keep pushing forward to your goals and your dreams. If one door shuts, another will open. You have to have drive, ambition, and guts. And try. You have to try.

Leave a good mark on the Earth. Be a good person.


Now...here's a little look back in time (click on Wyoming Cowboys 1987) to many years ago when I played college football. Remember...never forget where you come from... 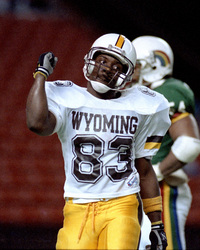 On another note, is football season here yet? LOL. I'm SO ready!
Posted by James Loving at 9:26 AM

I am grinning because of these boys...family enjoying football and making me proud...

Here's a shout out to CJ and Zachary Owens!!!

Watch for these boys, they are going to cover some ground and outshine the best!

When our youth play sports, it not only boosts their spirits, gives them a positive outlet, but sports builds character. Great job, boys! You make me so proud! 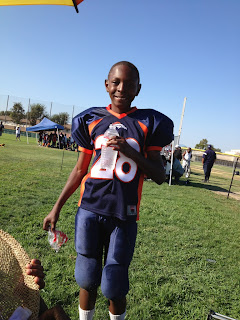 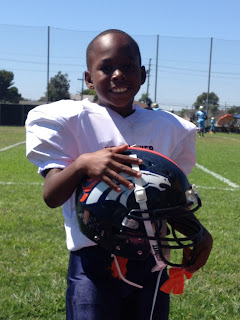 Boys and Girls Club of Casper

For all of you who listen to my show, you would know by now that making a difference with kids is something I feel compelled to do- to give back to my community.  I am very dedicated to our little ones. Perhaps, it's because I grew up in the Projects of Robbins, Illinois and I know what it is like to work hard and fight for your dreams. And dreams are possible. Everyone should know that and we should give youth everything in our power for them to accomplish that...even if it is just words.

Words of encourage. Words of motivation. Words are power.

Words are power. They really are. Sometimes we "blow off"  what we say or disregard it as minute. It may not be minute to someone who listens.

I felt overwhelmed with excitement when I was invited to do Loving That Sports Talk live from the Boys and Girls Club in Casper, Wyoming. Youth in Casper are fortunate to have a wonderful building and outstanding staff at the facility. I was really impressed by the positive atmosphere, mentors, and the guidance given to the kids.

Corey Adams arranged for me to broadcast live at the Club and I was introduced Ashley Bright, CFO. 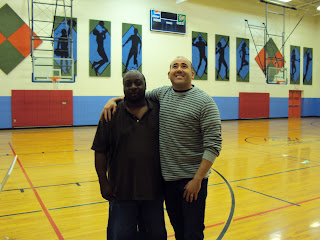 Ashley and myself
I was set up in a comfortable room and on the air in no time. My co-host, Terry Jackson, and I introduced the Boys and Girls Club of Casper on the air and got the conversation rolling about how we all have a responsibility to be role models and a positive influence for children.

Kids are really smart. They are able to distinguish right away whether an athlete is someone they respect and look up to, or frown upon if that athlete is negative, in trouble, or displaying bad behavior in public. Therefore, it is so important to portray yourself as a good person.

Galand Thaxton, formerly of the Atlanta Falcons and San Diego Chargers led the discussion on how important it is for athletes to keep a good image and reputation in order to be a positive role model that kids will respect.

When Ashley Bright came on the air, it was so refreshing to hear him talk about their mission to empower every child. He has been involved in the Boys and Girls Club for many years, beginning in Tacoma, Washington. That, folks, is dedication and commitment. He talked about all the benefits of the Club and the programs/activities/sports they provide. The Boys and Girls Club is definitely an asset to the Casper community. You really need to tune in to the show if you missed it by going online to Voice America. Ashley was "Johnny on the Spot" with knowing how to communicate with kids and how the Boys and Girls Club's programs fit the needs of today's youth. I really appreciate what Ashley is doing for his community.

A surprise guest, Paul Roach, my former Wyoming Cowboys football coach appeared for a segment. Coach is such a great guy and it was fun to have him appear and give us his insight on the bounties on players, which is a hot topic in football right now. Maybe I put him on the spot a little...listen in. His compliments made me get a little sentimental and emotional. My wife thought he was so cute on the air and such a very kind man. Yes, Coach, she was a fan of yours in college and thought you were a great asset to the University of Wyoming as did I!

Galand and I praised Coach Roach for his great influence in our lives. It's so true. I don't know if all of us realize how much of a difference a mentor or positive role model makes. Many times, the motivation sticks with us through to adulthood. Thanks, Coach, for being such a positive role model for me!

The show wrapped up with Galand talking about his friend, Junior Seau, and the positive things he left behind and what he contributed to the public as a fellow football player by empowering youth, and giving back to his community. We send our best wishes to Junior Seau's family and safe travel to my buddy, Galand, as he attends his funeral in California.

I felt the show touched on several important topics and how sports is really an avenue of influence to people. Not only is it entertainment on television, but behind the scenes... it is work for us and a good reputation is crucial when you are in the limelight.  Being in the NFL is an opportunity only a very small amount of athletes get to participate in. Our time in the "big show" is limited and we should use it wisely.

Later, I spoke to the kids in the gymnasium of the Casper Boys and Girls Club.  They were full of energy and life. I gave them the most important things I gained from sports...respect, discipline, and a hard work ethic. 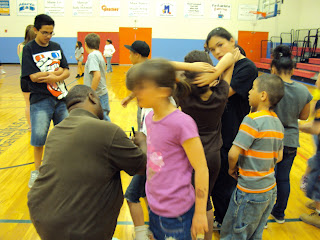 Moms, please love "The James." It washes off. 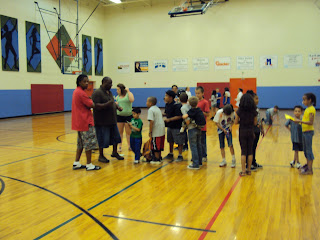 Corey and I getting bombarded by the kids 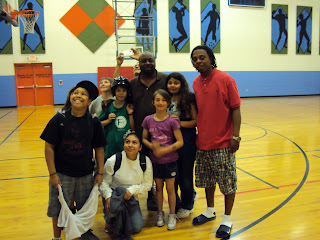 Corey and I with the kids.
I encourage all of you to volunteer some time to kids. Your local Boys and Girls Club is a place to contribute. Check it out in your community. Casper--you rock! Keep up the great work!﻿
I leave you with this...
"Leave a good impression. It's the only one you got."

YOU GOT THIS! BE A POSITIVE ROLE MODEL!
Posted by James Loving at 9:52 PM

Look Back In Time 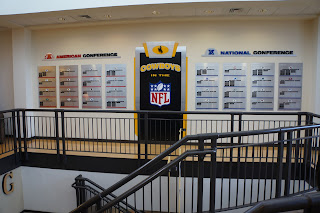 Recently took a visit to the University of Wyoming and the new athletic facilities. Well...new since I graduated, anyway. 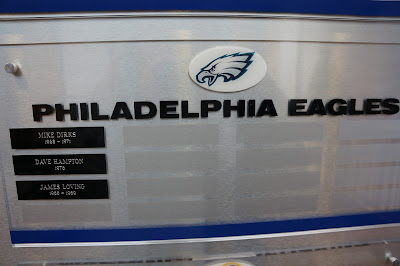 NFL Wall of Players from Wyoming who made it pro... 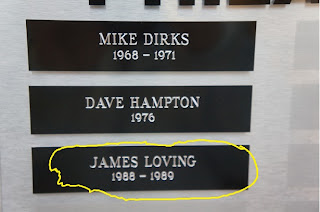 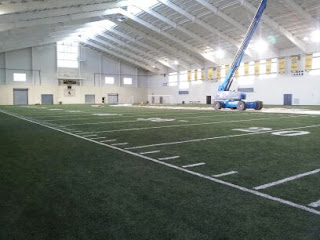 Pretty impressive!
Posted by James Loving at 10:06 AM 6 comments:

James Loving Dances With The Audience

Join James on the Radio every Wednesday 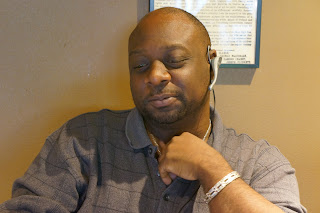 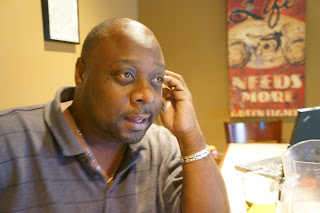 Loving That Sports Talk! on Voice America...
Posted by James Loving at 10:50 AM No comments:

Join James and his guests every Wednesday at 3:00 EST on  Voice America Talk Radio.
Posted by James Loving at 8:05 PM No comments:

Every year, I have several motivational speeches, charity, or fundraising events that I host. I'm on fire this year! I am excited! Let's empower our youth!

If you want to book an event in the Indiana-Illinois-Ohio area, you will receive a discount depending on mileage as this is my HOME area. My fees are reasonable and I would love to make a difference at your school graduation, charity fundraiser, or motivational event.

I apologize, however, my free spots for the 2013 are scheduled and no more are available at this time. I can arrange for donated raffle items and signed footballs for an event if you request one and give me time to get the items autographed. 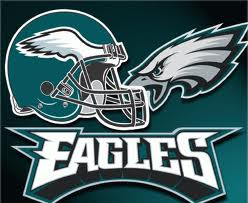 For all your high quality sportswear. Shawn Wiggins, owner, will outfit you in the latest gear at Wiggy's Closet.

Reaching inner city youths has been a passion for James throughout the years and he often visits home to share and motivate young adults. A link is provided to direct you to his family's organizations. 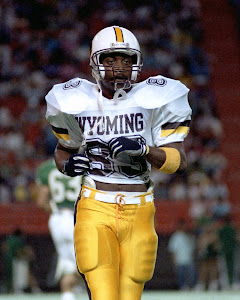 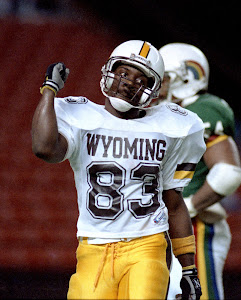 James Loving is a powerful motivational speaker reaching out to everyone, but especially empowering our youth. Contact James through email (jamesloving01@gmail.com) to request him at your event. 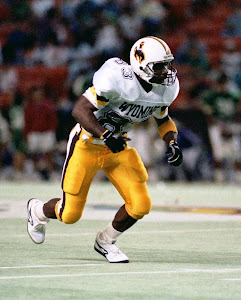 For all your NFL player news.